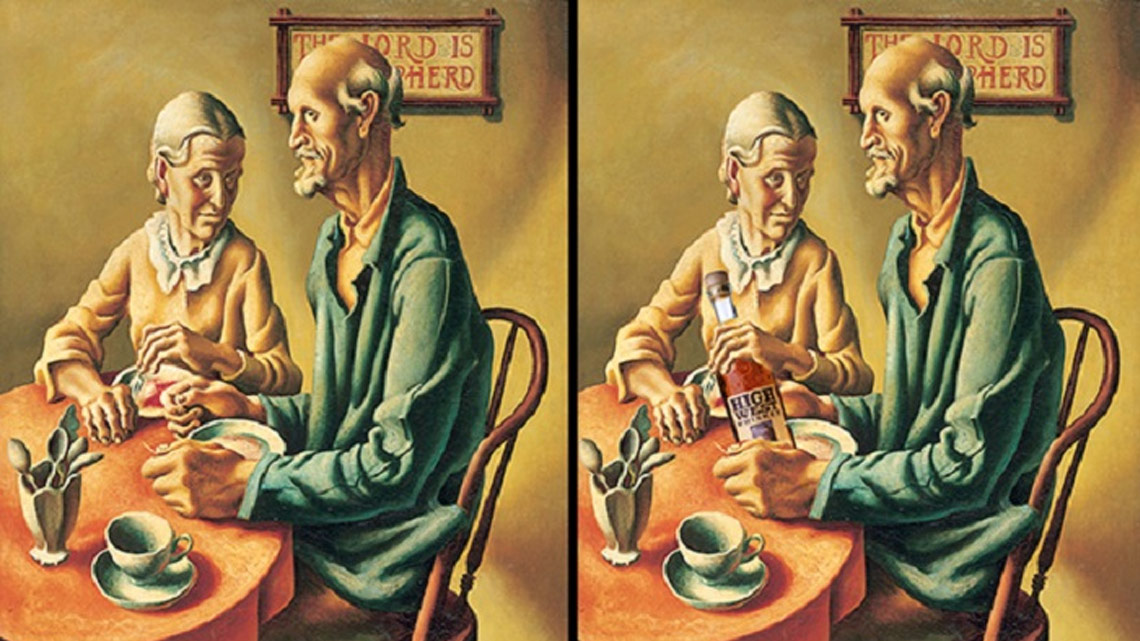 We only see the left ear on George and the right ear on Sabrina. If we didn’t know they were deaf, this composite pair of ears would go unnoticed.

The plaque on the wall gives us a hint: we only see the words, “The Lord is h-e-r-d.” For someone as focused on details as Thomas Hart Benton was, this had to be intentional. Benton is telling us that the Lord “hears” and the deaf are not handicapped in his sight.

Benton started visiting the Martha’s Vineyard in 1920 and continued coming back every summer for inspiration. He met the Wests in 1922 and it took him four years to finish the painting.

The painting is now part of the Whitney Museum’s collection of American Art. Lauren Ridloff, an art critic and educator at the museum says, “Notice that while the couple is silent, the wife’s eyes are focused on her husband’s lips…In Martha’s Vineyard, many of the people who lived there were deaf, and many individuals knew and used sign language…So perhaps the artist’s purpose in emphasizing the large, prominent hands could be a reflection of America’s value in hard work. Or perhaps it is a symbol of the couple’s deafness and use of their hands to communicate via sign language.” She adds, “Perhaps the ears are turned out to the viewer in representation of the couple deafness.”

In the definitive Benton biography, Thomas Hart Benton: An American Original, Henry Adams writes: “He returned every summer to the island, and for the first half of the 1920s, Martha’s Vineyard provided the subject matter for nearly all of his major paintings.” Adams notes, “The local population and the lush landscape provided endless subject matter for Benton. Benton was particularly captivated by the island’s ‘old-timers’.” Benton is quoted in the book with this keen observation that influenced him greatly: “When the old boys talked, you didn’t interrupt them. You let your own concerns go and listened. You learned things about people who had been on whaling ships and had swum miles at sea holding onto their boots, who had walked across miles of Arctic ice and had their teeth pulled by the village blacksmith with all the local heavyweights sitting on their arms and legs. Listening, you shared not only the adventures, but the spirits of the talkers. Keeping your mouth shut, you came to know the Island folks and what they and the island stood for. You got in touch with what was real.”

For our parody, we called on our friends at High West. The selection of High West made sense on three levels. One, their last names match. Two, High West makes great whiskies, and George and Sabrina look like they could use a good whiskey, even if they drink it from a cup. Three, Benton started the painting school that came to be known as Regionalism, popularized in the 30s when artists, like Benton, shunned the city and painted rural scenes about real people. High West Distillery, of course, is a regional distillery, or at least its roots are regional.

A toast to hearing and seeing better.

The easiest way for you to stay on top of what’s happening at Free American News is subscribe to our weekly update. Out every Friday morning, bright and early, it lists the latest post and has some exclusive extras. Please use the pop-up subscription form or click on the subscribe to newsletter box on the lower right-hand column.
Go to the Newsletter Subscription page
« Previous post
Don’t Thistle My Pink
Category
A Break
Next post »
When Gardening, Architecture and Music Mix