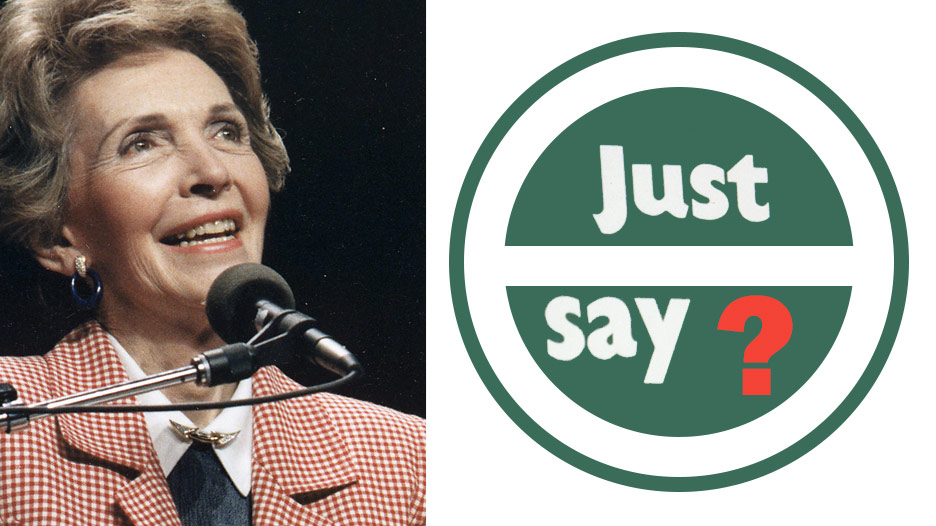 Editors Note: This is Part 2 of our analysis of today’s drug abuse problems. Part 1 was an examination of Who Is To Blame? This post is an examination of what went wrong with the good intentions at prevention that started in earnest in the late 1960s. It’s long and more for the policy and program finder/fixer than the casual reader. The final in the series will outline solutions that have not been tried, or tried and too quickly discarded.

What went wrong with Just Say No?

First Lady Nancy Reagan is properly credited with popularizing the “Just Say No” to drug abuse prevention campaign during the 1980s—the first and last sustained attempt at a national public “education” program about drug abuse prevention. It’s a great example of confusing activity with results. The problem was that neither she nor her advisors understood the problem.  I (Josh Hammond) know this because I created the concept, an ad agency added the restrictive and misleading word “Just,”—implying simplicity and excluding other options. Adults liked the message because it gave them another chance to tell kids “no” to something.

When we say “no” we create a vacuum. If we ignore the vacuum it is quickly replaced with something else we need to say no to. When we find a way to say “yes” there is no vacuum.

The biggest reason for failure of prevention programs is the lack of a specific goal the sponsoring agency wants to achieve. As in many top-down federal education programs about health, the goal is usually abstinence. While it may work for some of the target audience, it wears thin and quickly becomes counterproductive. Soon all information from the “source” is invalidated.

Preventing experimentation with drugs is not a realistic goal. Kids of any age know about the “magic” of pills: they know some pills make the headache go away, stop the upset stomach, stop the coughing and running nose. The pills make them feel better. Then they discover that being pushed on a swing—higher daddy, higher—alters the landscape and they can see an altered view of the back yard, or zooming down a swim slide makes the pool look really cool and inviting. It’s natural to want to alter the way we want to see the world and then come back to the way things were. The search is always on for that little thrill, buzz, dizziness, spin.

As kids grow older, exploring their world on their terms is natural. Exploring curiosity is the best “drug” experience a kid can have. The understanding of what drugs can do and what the alternatives are to achieving the same goal with less risk is an exhilarating part of growing up.

Taking illegal drugs for the first time is weird: it’s an acquired taste, much like beer, wine and cigarettes. When a kid takes his or her first sip of beer or wine, it’s usually a yuk! Then the pals are into it and yuk takes a back seat, and it’s not so bad—just takes some getting used to it. Same for cigarettes.

Drug abuse prevention ads don’t start with tobacco and beer and that’s a big mistake. Preaching only about the evils of illegal drug experimentation is like saying we are going to cross the country by starting you off in Kansas.

For the record and a way to sort out some of the myths about this campaign, the Say No message was created by Pacificon Productions in San Francisco under a competitively won contract from the US Department of Health and Human Services for the Carter Administration. I was a partner at Pacificon and manager of this campaign which included message strategies for classroom teachers (math, language, science, social studies), public service ads (Drugs Just Aren’t My Style for 12 year-olds), and community support programs, patterned after the highly touted Framingham Heart Program. The Framingham model shows how effective community support is for prevention and how replication of studies is essential to effective treatment solutions. Isolated messages alone do not work in prevention, rather they are the “knock on the door” for a comprehensive, community-based support program that includes alternatives, counseling, and support programs.

The first litmus test for anyone running a community drug abuse prevention or treatment program is to ask them what they know about the Framingham study and what lessons-learned have they applied. You are likely to get a “whats study”?

Why Just Say No Failed

The “Say No” campaign was designed for 12-14 year-olds only: the first national public education program to segment its audience and target a message that was age-specific. Instead, it was broadcast indiscriminately from the start with a total disregard to targeting. What was designed as a research-based peer-to-peer development strategy was turned into a personal-based media campaign championed by “first mom,” a talk-down lecture, the voice of authority.

This was the first time that any government agency planned for any form of market segmentation and narrow-casting of a health message. Instead of referring to all kids as “youths”, this was an effort to use psychographic data, case studies, and qualitative research to drill down into a message that met a particular age group at their level of need, using their words, using their images. It was based in part on Maslow’s Hierarchy of Needs. It was the first of three targeted messages. The plan was to have a follow up message for 15-17 year-olds, then a second follow-up for 18-21 year-olds. Each was to be tailored to the developmental needs of young people within those age groups. The three campaigns would be released in two-year intervals starting in 1978. Then Nancy Reagan mistakenly “found” a one-fits-all message and drug experimentation still tracks that what young people discover is natural, normal and not the end of the world.

Today, with the dominance of the internet and social media, these age limits are not as rigid as they were in the 80s. So, fudging on the front-end of the age group is a safe and smart way to go. The key message point is that as kids turns 12 they are at a stage where they want to express themselves about their values and habits and interests in their way, in their words.

Too many parents get confused and they are afraid to let go and let the child do things their way. There is rarely a case where the kid diverges from the values he or she has been raised. There is little disagreement on what decision needs to be made: the clash comes with how the child chooses to express himself or herself.

A critical step The Trump Administration is likely to skip.

The Say No message was based on research conducted at the University of Houston. The findings were replicated at the University of Minnesota. That never happens any more in the design of public social programs. The goal of this research was to discover strategies to prevent cigarette smoking—yeah, it’s a drug and in the top three causes of death in America.

FYI: 16 million Americans are living with a health problem directly related to cigarette smoking; 480,000 die each year at the rate of about 1300 every day. And this is all legal. Marijuana does not even make the bottom of the list on causes of death. And the opioid crisis—part legal and part illegal—is tragic, but not in the same death league.

Here is what happened at Houston that is so essential to understanding where to begin when crafting a prevention message of any kind for any age group. 750 seventh and eighth graders were randomly selected and separated into four groups.

The surprise conclusion: Group Three, those taught interpersonal skills as a way to resist peer pressure to experimenting with cigarette smoking, delayed their experimentation with smoking cigarettes for up to two years over the other three groups.

The key word for the health care professionals was delayed. The longer time a young person waits to experiment with drugs, the more mature the brain is in helping process the decisions and the more developed the person is for accessing risks and exploring alternatives to achieve the same purposes without the same possible negative consequences. The Carter Administration rejected the strategy when they found out it was not an instant abstinence program. That it only delayed the potential experimentation for a few years. Adults and authority didn’t want something that worked for kids as a natural part of growing up, but something that made them feel good while delivering the message.

I am not on the inside of the Trump Administration’s development of its drug abuse prevention strategy. We do know several factors. The president does not smoke or drink. He sees drug use as a sign of personal weakness, a matter of character and personal discipline. His attorney general Jeff Sessions is back to the dark days of arresting young people, especially blacks and Hispanics, for simple drug use and possession. The Attorney General is on a moral crusade and wants draconian federal laws to replace the progressive decriminalization and legalization laws of states that have finally brought some common sense to the nation’s drug abuse challenges.

Like the Reagan administration, the Trump administration will be focused on clever sayings that make copy writers happy, engage media critics in the reuse of scare tactics, and enable the epidemiologists to document a year or so from now that none of this made a sustainable difference, except it was something authority could check off their list of what makes America great again.

The Greek chorus was an integral part of ancient Greek theatre, a group of three or four performers who looked alike and spoke all at the same time. Their part was to comment on what was being said and help the audience know what the characters in the play were thinking. The chorus usually sang, or spoke. We honor that tradition here
hide information
Johnny DeppIn "Donnie Brasco"

The easiest way for you to stay on top of what’s happening at Free American News is subscribe to our weekly update. Out every Friday morning, bright and early, it lists the latest post and has some exclusive extras. Please use the pop-up subscription form or click on the subscribe to newsletter box on the lower right-hand column.
Go to the Newsletter Subscription page
« Previous post
Patriotism, the Flag and the NFL
Category
Community
Next post »
One Nation Under God