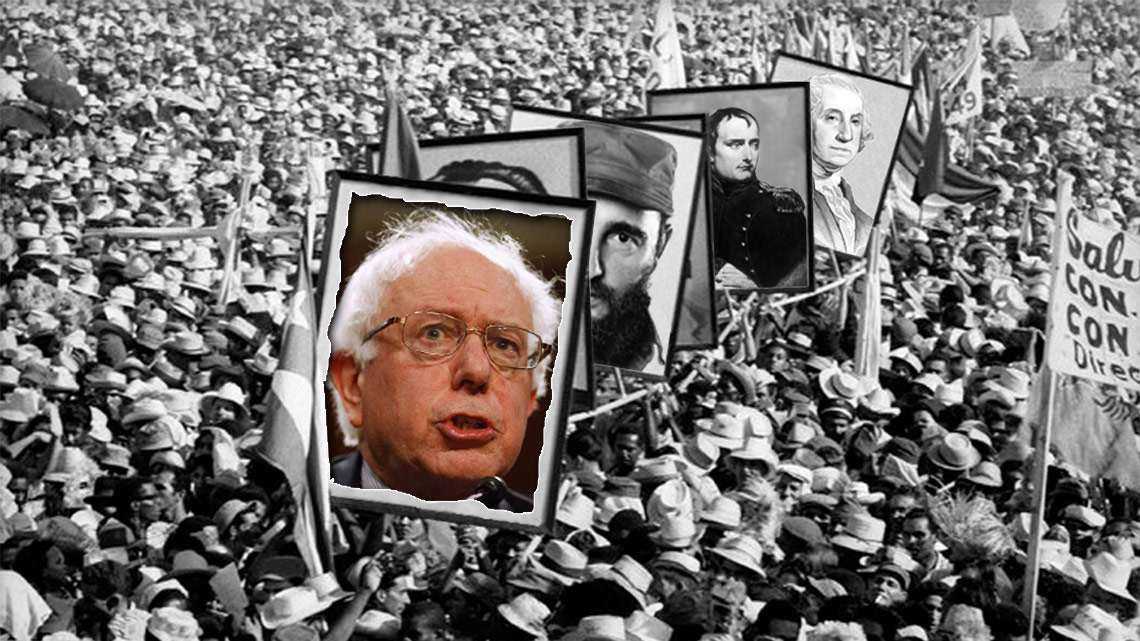 Sanders is as much a revolutionist as the Pope is a hockey player. Just because you can use the word and wag your finger and raise your voice doesn’t mean you know anything about revolutions. Sanders is an old white man, an imposter, a carpetbagger from Vermont and he is getting ready to highjack the Democratic Party nomination again as a Socialist. He didn’t even have the courtesy to change parties when he ran for president in 2016. He just pooped in.

The good news is Vermont has made it legal to smoke more than corn stalks. Maybe the only Socialist in the US Congress could do for weed what Fidel did for Cohibas. Now that would be revolutionary!

The only person in the Burn Camp who had any understanding of the basic elements of revolution was Nina Turner, a fiery, articulate former State of Ohio senator. If she had a more substantial platform, she should be running and having Bernie open the door for her.

At this point you may say “so-what?” “What’s the big deal?” Our response is that part of the decay in public discourse is that words are losing their meaning and thereby inhibit understand. Are you suggesting that cultural revolutions are the same as revolutions in cancer research? That face-recognition software is revolutionary? That words can mean anything at any time as determined by anyone? Maybe, but first we should understand the power of the word revolution in it’s original sense. We are content to leave it there and find another word for what happened in the industrial revolution, 20s, the 60s and most recently the 2016 presidential election.

There have only been three classic revolutions in modern time—American, French and Cuban. Russia and Mexico would want to make a case that they should be included. Egypt is the most recent country that may also have a case. Fighting, killing, assassination, coup or coup d’état, regime change (as Bush 2 liked to say) and burning the palace or parliament does not make a revolution. Revolutions are planned or organized event sprout spontaneous, but they are sustained over a period of time. They have a beginning with an idea, a middle with upheaval, and an end where “nothing” is the same anymore. The goal of a true revolution is to over throw the existing government/rulers and create a new constitution and a new way to govern.

In classic modern terms, revolution started with America, then France, followed by Cuba. The American revolution is the most enduring.

I was taught to think of revolutions as a fever. Before the fever is obvious, your body gives off signals that may include: sweating, chills, headaches, muscle aches, loss of appetite, irritability and general weakness.

The key to getting rid of a fever is rest, but here the metaphor breaks down. In a real revolution the fever is the prelude to violence, sacrifice, death, destruction and ashes. It’s out of the ashes that a new order arises. The old order is gone—usurped, destroyed, replaced—and a new order is installed. New is invariably idealistic. Goals are unattainable. Some get shortchanged. Others are dillusional. Fighting is easy: governing is hard. Fighting is fun: maintenance is boring. Both are what make revolution successful.

The Greek chorus was an integral part of ancient Greek theatre, a group of three or four performers who looked alike and spoke all at the same time. Their part was to comment on what was being said and help the audience know what the characters in the play were thinking. The chorus usually sang, or spoke. We honor that tradition here
hide information
Our vigilance will not be televised.
Gil Scott Heron said the change starts
with the invisible, in the mind and that his song.
“The Revolution Will Not Be Televised.”
Updated Posts
Patriotism, the Flag and the NFL

The easiest way for you to stay on top of what’s happening at Free American News is subscribe to our weekly update. Out every Friday morning, bright and early, it lists the latest post and has some exclusive extras. Please use the pop-up subscription form or click on the subscribe to newsletter box on the lower right-hand column.
Go to the Newsletter Subscription page
« Previous post
Every Generation Has Someone Who Sings For Them
Category
Amnesia
Next post »
Trumpet