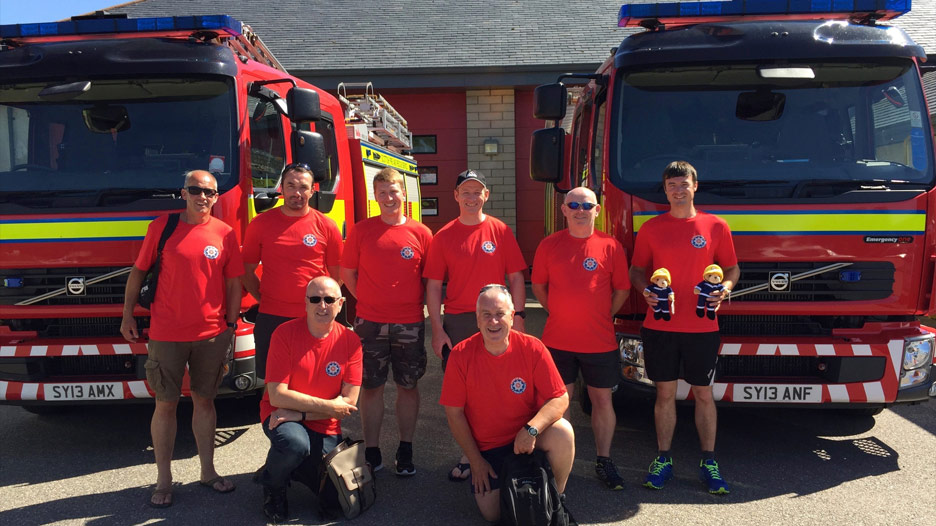 Another Fine Mess, by Geoff Carter

“Well that’s another fine mess you have gotten me into.”
Oliver Hardy to Stan Laurel.

Here am I at 02.00 in the morning this time of the year, driving my local rugby club’s 15-seater mini- bus with six Uber-fit firemen from the Isle of Man, asleep in the back after their physical endeavours on Day 2 of the Three Peaks Challenge for the Firefighters Charity, thinking exactly the same thing, only this time it is me talking to myself rather than Ollie to Stan.

The National Three Peaks Challenge involves climbing the three highest peaks of Scotland (Ben Nevis), England (Scafell Pike) and Wales (Snowdonia). The challenge is to complete the task within 24 hours. The total walking distance is 23 miles (37km) and the total ascent is 3064 metres (10,052ft) The total driving distance is 462 miles.

It seemed like a good idea at the time, I said to myself silently as we travelled down the country lanes of the Scottish Highlands north of Glasgow before hitting the motorways that would take us from Scotland to climb the second of the Three Peaks, Scafell Pike, located in the English Lake District. 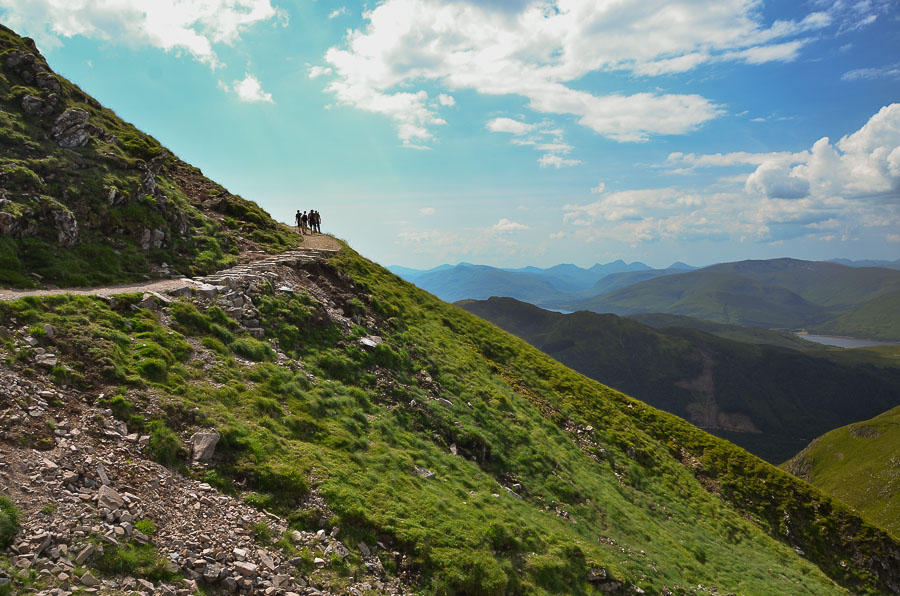 Note that I say “we” but of course I am a shadow of my former buffed, football and squash playing athletic looking Adonis. And my part of “we” is now restricted to just being 1 of 2 people whose sole duty is to get these six Uber-fit firemen from the Isle of Man Fire & Rescue Service from one Peak to another.

The man who recruited me to the team is primarily a builder but he also serves as one of the 110 “retained” (part-time) fireman on the island and, being a smart cookie, he did not reveal all when he first approached me about signing on for the gig.

I visualised 3 nights, albeit different locations, in a bed in my own private room with clean sheets and shower/toilet in a comfortable, but not necessarily expensive, hotel. After all this is for charity so we can’t be profligate. But I swear he didn’t tell me at the start of our dialogue that I would need to bring a sleeping bag with me because on the first night we would be bedding down in a youth hostel with the great unwashed, or that for the 2nd night there would be no sleep at all for me as, along with my co-driver, I would be tasked with driving through the night to the Lake District for 6 hours to make sure we kept to schedule. As I discovered only after I said I would do it, the team would only “succeed” if we did the Three Peaks in 24 hours or less.

In fact, my experience has been akin to peeling an onion. You know what I mean, one layer after another and believe me there has been a few tears in the eyes along the way as the layers are unfolded.

The Sunday evening before the great adventure started on the following Wednesday we rendezvoused in a local hostelry where I met the six members of the Three Peaks Team, along with my co-driver, for the first time.

A jolly time was had by all over the warm pints of beer as the layers of the onion were peeled back some more. For instance, apparently, this summer in Scotland the midges are in great abundance and so I was told I needed to purchase a bottle of Avon Soft Skin Silk cream as it is recognised by those that know these things as the only cream known to man, and indeed woman, that can protect us mere humans from the midges’ presence and interest in our flesh.

And then I am presented with a form I have to sign to apply to join the Rugby Club as this is the only way to get me onto the bus as a driver and covered by the Club’s Insurance Policy.

What’s the worst thing that can happen just by signing a harmless piece of paper I hear you say.

Let me tell you here and now that however short they might be one Saturday afternoon to put out a team of 15 players next season I am not putting my boots on in preparation to be tackled by a 200lb opposition front row forward for anyone.

The one ray of hope that was offered to me on the Sunday evening in the pub was that once we had finished the 3rd Peak, yours truly would then drive the, no doubt knackered but hopefully jubilant team, to Liverpool where I was promised my own bed and shower/toilet for the evening, preceded by a tour of several of the wonderful gin houses that the 2009 European City of Culture offers.

It is now Saturday morning and my work is done, well almost as we still have to catch the Steam Packet back to the Isle of Man, but the good news is that I am now a “legend,” at least in the eyes of these six firemen and my co-driver.

Having successfully completed the ascent & descent of both Ben Nevis and Scafell Pike, the first half of the final leg of the journey to Snowdon was a pleasant drive, well managed by my co-driver through scenic parts of the Lake District under a full moon and, time wise, we made steady progress. However, the second half of the journey, my bit, was fraught with traffic problems on the motorways and there was growing nervousness in the bus as we worried that we might not make the 16.00 deadline to register for the third climb. Certainly, the Sat Nav was suggesting it would be a close-run thing as we set off from Scaffel Pike and the official at the bottom of Scafell Pike who registered the team’s success in completing the second climb left us in no doubt that, in her opinion, we wouldn’t make it.

So much effort extended to conquer the first two Peaks only to be denied at the last due to road works and the associated traffic congestion.

The mood in the back of the bus became sombre but they all agreed that they would still complete the third climb, even if they missed the official deadline but nonetheless, it meant they would have failed to succeed in completing the challenge in 24 Hours and would not therefore get the medal and certificate as the official confirmation of success.

And then the miracle.

With yours truly at the wheel, and a fixed determination that we would indeed make it, the rugby club mini bus became a magnificent chariot, carrying its 6 warriors and 2 supporters as we drove, fast and furious, but of course always respecting the Highway Code, towards Snowdon.

The closer we got to the check in point the more the team wondered if they might actually make it. Slowly but surely the mood in the bus changed from one of disappointment to one of possibility.

With less than 30 minutes to go before the 16.00 deadline, it was still touch and go whether we might make it but, ever optimistic, the team started to get their third set of clean climbing gear on, just in case, and a new energy emerged.

Suddenly watching the hands of the clock inexorably ticking away became all-consuming for the team whilst I concentrated on the driving and as we climbed the final hill towards the Snowdon check-in point we could see the station and the nervous tension in the air was palpable.

We crested the final hill and hurtled up to the check-in point with three minutes to spare. Victory snatched from the jaws of defeat.

The Band of Brothers threw themselves out of the van, whooping & hollering and shouting “Geoff, you are a legend” 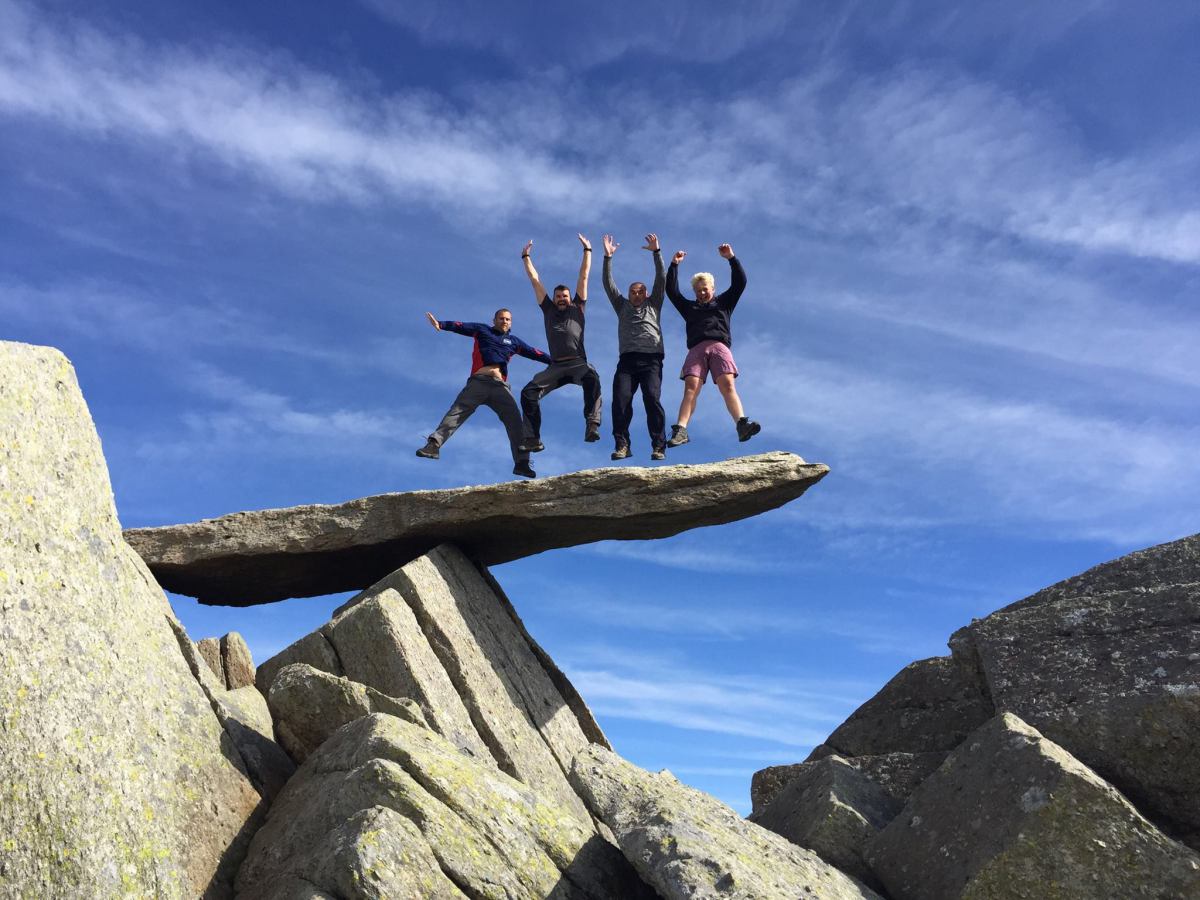 It seems I might have found myself a new career as either a rally-cross driver or at the very least, a chauffeur to madcap teams who need to get from A to B in good time.

However, I try to learn from each experience that life gives me and knowing these guys do charity challenges every year, I will make sure I am better prepared next time and know what questions to ask before I get myself into another Stan & Ollie, fine mess, situation.

The Greek chorus was an integral part of ancient Greek theatre, a group of three or four performers who looked alike and spoke all at the same time. Their part was to comment on what was being said and help the audience know what the characters in the play were thinking. The chorus usually sang, or spoke. We honor that tradition here
hide information
Christina Aguilera
"Climb Every Mountain"
Updated Posts
Patriotism, the Flag and the NFL

The easiest way for you to stay on top of what’s happening at Free American News is subscribe to our weekly update. Out every Friday morning, bright and early, it lists the latest post and has some exclusive extras. Please use the pop-up subscription form or click on the subscribe to newsletter box on the lower right-hand column.
Go to the Newsletter Subscription page
« Previous post
Hooked
Category
Community
Next post »
Crossing Sounds