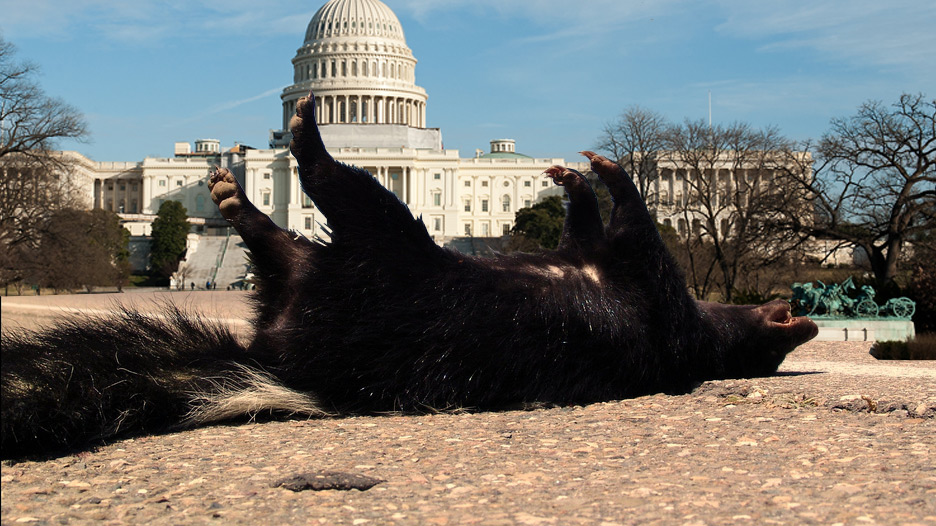 To paraphrase singer songwriter Loudon Wainwright III, we have a dead skunk in the middle of our national public discourse, stinking, stinking up the Halls of Congress, the airwaves, our living rooms, our apps, our pews. How much longer will we tolerate this stench before we can hear—and be heard—without the smell of deception? When will we stop hiding behind the expression—The American People—to cover our laziness, waywardness, deceptions and false claims to inclusiveness.

All politicians elected to a national constitutional office, most talk show hosts, and practically all guests on those shows lie. No one calls them on how they frame their talk. Nor does anyone ask what the person what they mean when they use the expression. Un-checked, unquantified chatter—political drool—only corrodes public discourse more and more each day.

The expression—The American People—is a mask of deception. Those who use it pretend to be inclusive, but in fact they are being exclusive, and in the process, they diminish the views and values of those who disagree with them.

It is useless unless quantified.


Words in politics are like gunk from a rusted-out pan
None of this lying is deliberate: it is just a bad lazy habit that seeps out of the mouths of politicians and pundits like gunk from a rusted-out pan. Words in politics are like car oil, used for lubrication and cleaning of internal combustion engines. A quart of metaphorical oil should be added to government systems, processes, and the “regular order of business” Senator John McCain pleads for in these solitary, confining moments as he remembers why he served his country as a prisoner of war and now a prisoner of manipulated procedures. The oil, the arguments, the framing, the misrepresentation of what American voters want and don’t want, need changing to keep things moving, to get us from intractable Point A to more malleable Point B without summarily dismissing Point C.

Those three words invariably precede an announcement, proposal, position, rationale, opinion, justification for or an argument for and against a matter of broad public concern. Trained pollsters and disciplined academics usually quantify the expression with a number, usually specifying a proportion of the public (half, a third, one in ten) or percentage of “The American People” covered by their statement. Invariably this essential “clarification” is overshadowed by another person on the panel who says, “but the American People” don’t want that, offering no quantification.

The expression, The American People, implies some kind of unanimity, consensus, agreement, simpatico something or other, implied patriotism and loyalty to e plurbus unum, out of many, one, a sentimental notion of ages past. It’s lazy talk. It’s corrosive. Every time we hear the expression, with no quantification, we are shortchanged in our yearning for the whole truth, and we are left with only a bad smell.

There is a way around us being skunked every day.

The expression “The American People” should not be used. If it is used it should be quantified with words such as majority (big ones, narrow ones, slim ones), plurality, most, many, a specific percentage of (active, passive, young, old) Americans, or a percentage of those who agree with the presenter (about 30 percent, more than 60 percent, etc.) That is all that is required.

When Speaker of the House Paul Ryan says “the American people,” he means not all Americans or all elected Members of the House: he only talks for a temporary majority of Republicans elected to the House of Representatives that changes every two years. While he boldly proclaims his position on issues as representing the desires of The American People, he fully knows that a majority of Americans hold a different, often opposite opinion on a wide range of issues, such as background checks for gun purchases, pre-existing health conditions, minimum wage, immigration, and taxes.

On cable news there is no clearer example of this skunk-stink than Chuck Todd’s interview with Ohio Republican Congressman Jim Jordan (9/26/17). In a routine 10-minute segment of MTP Daily on MSNBC, Todd used the expression “The American People” several times, while Jordan used it at least a dozen times. Todd’s took it in stride as part of the networks day-old spaghetti effort to “present both sides” of a story that equally employ the cover words. That needs fixing. Todd should be asking what Jordon means when he says, “The American People.” And he should push for clarification. He could be the leader on this essential reform.

Jordon is on safe ground when he speaks only for a strong majority of those who voted for him in his congressional district. He is part of the stink when he claims to include the 30 percent who voted against him. If he simply said, the majority or a strong majority of voters in my district want this, then he is good to go, but not with a deception and overreach where he voids what the minority says in his district and superimposes his views. Hold your nose!

It requires no training, just discipline. Not new technology, just clarification of claims, no revised guidelines, just a heads-up to guests before show time. One major network or one major cable news group needs to announce that going forward, they will no longer use the expression “The American People” without quantification, and any guest on their show will be asked to specify what they mean when they use the expression. That’s it.

The Greek chorus was an integral part of ancient Greek theatre, a group of three or four performers who looked alike and spoke all at the same time. Their part was to comment on what was being said and help the audience know what the characters in the play were thinking. The chorus usually sang, or spoke. We honor that tradition here
hide information
He shoulda looked leftAnd he shoulda looked right
Updated Posts
Patriotism, the Flag and the NFL

The easiest way for you to stay on top of what’s happening at Free American News is subscribe to our weekly update. Out every Friday morning, bright and early, it lists the latest post and has some exclusive extras. Please use the pop-up subscription form or click on the subscribe to newsletter box on the lower right-hand column.
Go to the Newsletter Subscription page
« Previous post
NBC News Monkeying Around With Us
Category
Community
Next post »
Dispatches from the Isle of Man