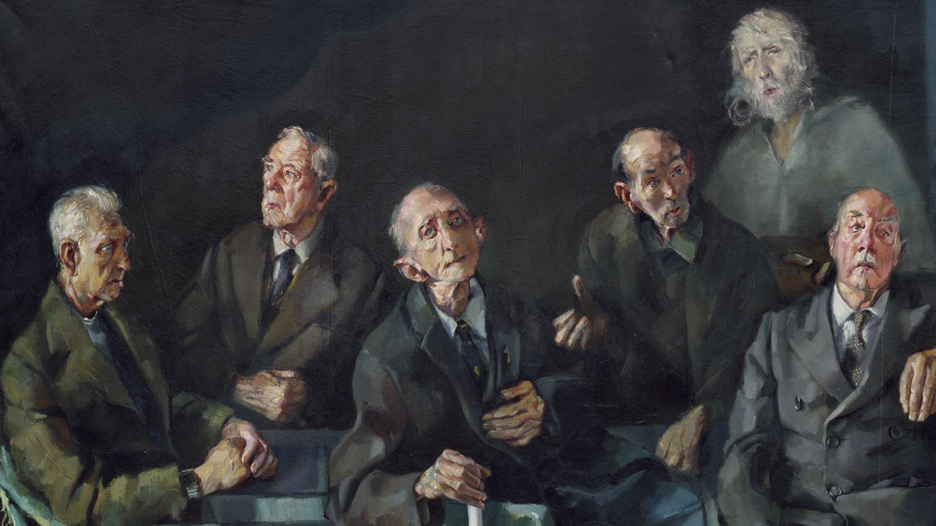 Many say a picture is worth a thousand words. The Chinese proverb that preceded the use of the expression in the US says a picture worth twice as many words. I’m surprised the American’s didn’t up the ante.

Here we have a dramatic and haunting painting by Robert Lenkiewicz worth 10,000 words. His paintings are informed by his study of the sociology of vagrancy, mental illness, old age, suicide and death. He seeks to illuminate the lives of those he called “the invisible people.”

We at FreeAmericanNews.com have been mesmerized by it since we started looking for a visual support of this post. It says what we feel about the field of candidates making the early preference polls. With 20/20 vision, we should get this one more right, if we start off right.

It turns out that many of our Founding Fathers were Founding Teenagers with a good representation of Twentysomethings. The average age for signing the Declaration of Independence was 44. Benjamin Franklin was the oldest clocking in at 81, the youngest was 26, Johnathan Dalter, 26 from New Jersey.

There is no upper-limit age to run for president: there should be.

We recommend 70 to be determined by the age a president-elect would be on January 20 of the year they would be sworn in as president. Reagan was 69. Hillary Clinton would have qualified. No so Trump. The medium age for president is just over 55. Teddy Roosevelt was the youngest president, assuming the office after the assassination of McKinley. John F. Kennedy was the youngest elected president at 43.

We proposed Five Rules for all candidates running for president running in 2024 to get an amendment amended.

Don’t Round Up the Usual Suspects

Eliminate Those Who Feel Entitled

(The bane of major political parties: Hillary Clinton twice for Democrats, John McCain for Republicans, and Bernie Sanders for the Socialists.)

There is Precedent for Not-Seeking a Second Term

Rule 3 concerns us the most.

Those in this group have name recognition, “experience,” hangers-on staff, peanut galleries, peanut shells on the floor, and they are about the same age as voters who should have a memory for the good, the bad and the ugly.

Bernie Sanders is not only an old white man, but an imposter. A Socialist who refuses to switch to the Democratic Party, but has no qualms about running as one “just to be president.” A carpetbagger from a border state that is no more representative of the United States than vanilla ice-cream is at Baskin Robbins. Vermont is one of the least diverse and smallest states in the Union that offers good health and good education, but the ranks 39th out of 50 in its ability to pay its debts. (Given the 1.5 trillion dollar debt the US government is proposing, this might not be an issue.)

Oh, and Vermont has over 100 19th Century covered bridges—postcard stuff, not infrastructure priority.

Do we have an “amen” or should there be no upper-limits to running for president?

What are your thoughts? Who is on your scratch sheet?

The easiest way for you to stay on top of what’s happening at Free American News is subscribe to our weekly update. Out every Friday morning, bright and early, it lists the latest post and has some exclusive extras. Please use the pop-up subscription form or click on the subscribe to newsletter box on the lower right-hand column.
Go to the Newsletter Subscription page
« Previous post
Nah, You Can’t Get Facebooked Again
Category
Community
Next post »
Whose Fault is the Drug Abuse Problem?